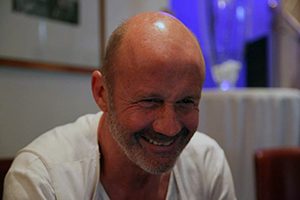 As of 1967 he was a member  of the Stuttgart-based media commune „ production community for text, sound and image“ which aimed at connecting the social revolutionary political  currents of those times with the subcultural artistic sense of a unity of co-existence and political movement. Amoung others, the commune published Wilhelm Reich, the „living theatre“, as well as unknown artists. Furthermore members of the commune formed a band, produced Super 8 and video movies, the latest of which was „Vietnam War has not ended in the FRG“.

Christof Wackernagel was the main actor in the movie „Tattoo“ (1967) and other films. Later he was on the cast for ongoing series and TV productions.

Member of the Red Army Faction in 1977, arrested in Amsterdam in 1980 and sentenced to fifteen years in prison in Düsseldorf.

As of 1987 he lived in Bochum working as an author, inventor of hieroglyphics and actor.
In 1999 he initiated the cultural caravan project »Qafilat as-Salam«.